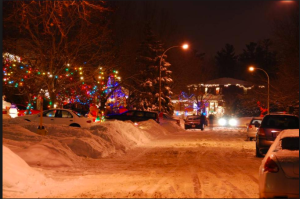 Write a story about a yahoo:  a hooligan, noisy loutish individual.

I could hear the revelry the moment I stepped out of my car.  The house seemed to be pulsating even from the road. I watched my step, being careful not to lose my footing on the ice underfoot.  The wind was so brisk I had to pull my wool scarf up closer around my neck as I found my way along the frozen sidewalk to the address I was looking for.  It struck me as silly to even be looking for the house number…just the pulsation alone was enough to tell me which house I was looking for.  Well, that and the holiday lights.  The front door had a massive wreath, likely hanging from an equally massive door-knocker that was obscured behind it.

The holiday lights hanging from the eves above glittered and strobed, changing colors faster than I could change breaths. I carefully climbed the three steps to the front door, slipping just a bit on the final step and looked around for a doorbell. Easy to find, since the entire place was bathed in a bright white spotlight emanating from a source behind me and carefully placed to hone in on that door wreath. Glancing back over my shoulder, it was blinding. The intensity surely was meant for the aide of flying saucers taking their first pass over this particular galaxy.

I’d had enough standing around already, so I simply let myself in.  Both the warmth and the noise were astounding from this side of the door.  Partiers were crammed together like sardines in a tin.  Clearly, I was behind schedule.  Squirming out of my coat as I worked my way through the crowd, beyond the living room and on into the kitchen, I realized there were hardly any familiar faces.

When at last I broke through to a pocket of air that was just large enough for me to gather my coat, scarf and gloves in a manner where I would no longer have to worry about losing them, I glanced around for the hostess.  I was certain she’d be in the kitchen.  All good hostesses are, no matter how well organized, how well mannered, how well put together they may seem.  It’s inevitable.  The hostess ends up in the kitchen…that’s just the way it IS.

“Hey! Look who’s here!” I spun around to see whose drunken voice that was screaming in my ear.

“What took ya so long? You been holdin’ out on me?” he slurred.  Wide eyed, I just stared at him.  He was wobbling, and his cocktail was sloshing about which accounted for the saturated napkin that was pressed beneath it.

“Do I know you?” I asked.  Although why I even spoke is beyond me.  I already KNEW I didn’t know this guy…a total stranger.  And, by the looks of him, a total dork.  His pants were too short, his red Christmas vest looked like his uncle’s from several centuries ago, still retaining the old food stains that marinated in mothballs over the decades, and his tie was horrific.  Was that really a reindeer getting it on with…? Oh lordy, look AWAY!

As he leaned in, I backed away and did an about-face. I quickly immersed myself  into the crowd.  Still toting my coat, gloves and scarf, I headed out the same way I’d come in.  Pushing my way between conversations with “Excuse me.  Excuse me.  I’m sorry.  Excuse me.”  Finally, I broke through to the front door.  Just as I was getting my coat back on, I heard what sounded like a shrill scream.

“Let GO of me, you bastard! You’re DRUNK!”  I could see her…glaring at him as he stumbled along in his attempt to stay upright.  Quickly I pulled on my gloves, adjusted my scarf and yanked open the front door.

“Claire!  Where you going?! You just got here!”  It was the elusive hostess, slithering out from the mob.

“Work?  This time of night?” she asks suspiciously.

“You’re a dermatologist!  You’re never on call,” she insists.

“Well, sometimes I am.  And tonight, Dr. Yahoo sent a clear message that I needed to leave here pronto.  Happy Holidays!”